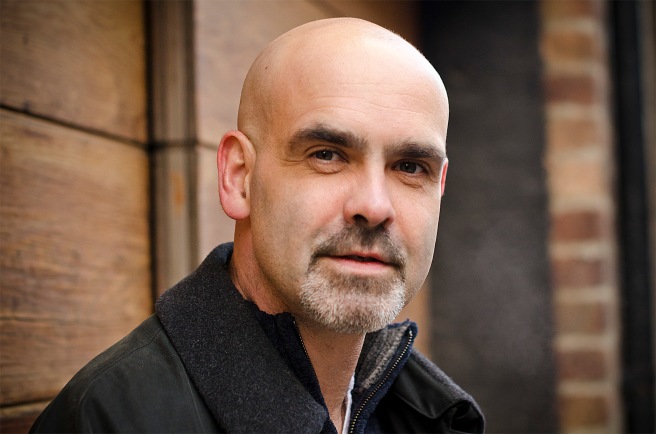 Wayne Price was born in south Wales in 1965 and has lived and worked in Scotland since 1987. He is a short story writer, novelist and poet and has won many national and international awards for his work. He is a lecturer in English and Creative Writing at the University of Aberdeen where he also co-ordinates the undergraduate Creative Writing Programme. He has performed his work at Aberdeen’s Word Festival, Glasgow’s Aye Write! festival, Dundee’s Ignite festival and the Edinburgh International Book Festival.

I met Wayne when he was awarded a Scottish Book Trust New Writers’ Award in 2011, when part of his Award included coaching sessions with me (along with other book world people). In February of 2012 he published his debut collection of short stories, Furnace, with Freight Books. Since then he has published a novel, Mercy Seat (Freight Books, 2015) and a collection of poetry, Fossil Record (Smith|Doorstop) chosen by Carol Ann Duffy as one of only four ‘Laureate’s Choices’ in 2015.

This is the eighth interview in the series here on the blog, asking writers the questions that come up most often with the beginner writers I work with:

[Sophy] When you first started writing creatively, what advice would have helped you?

[Wayne] I started out as a writer some time before the explosion in the UK of creative writing courses, ‘How To’ manuals, mentoring schemes, blogs, MOOCs, etc, so like most writers of my generation I picked up tips the old fashioned way – by reading and imitating, and going up all kinds of weird and wonderful dead ends along the way. It’s definitely a slower process, but I’m not really sorry – the best way to learn anything is to bump (painfully) up against the limits of your current ability and be frustrated enough about it to make improvements, however small. And that’s still how beginning writers learn the most important lessons, I think – all the other assistances make the journey more companionable, like walking in a group rather than tramping it solo, but it’s the same long road it ever was. There are plenty of shortcuts nowadays to getting your work in front of people, but that’s a different thing altogether, and there aren’t any shortcuts to truly getting better as a writer, thank god. Otherwise there’d be no adventure in it.

The first piece of technical advice I ever received was in an acceptance letter from Jon Silkin, the late editor of Stand. I was nineteen or twenty and had just begun placing stories with magazines a year or so before. He asked me to cut the ‘portentous’ (and it was cringeworthily portentous) last sentence of a story I’d submitted, and apart from being good editorial advice it was a watershed moment for me in more general terms. It made me realize the simple but absolutely fundamental truth that you could do a lot of things right in a story or poem, but just one moment of sloppiness could wreck everything around it. It also taught me that you can achieve almost any shade of meaning and suggestion if you simply trust the voice of the story and the intelligence of the reader: that you don’t need to shoehorn in moments of heightened diction and authorial cleverness to say something you feel deeply about. Not much later, I was able to recognize that in spades from writers like Carver, Munro, Bobbie Ann Mason and Kelman, among others, but Jon Silkin’s brief note was when the lightbulb went on and I’ve been grateful for it ever since.

The encouragement aspect of getting taken seriously by someone like Silkin (a poet I’d studied at school) was also a big deal to me. Every young writer needs some encouragement when they’re starting out, if only so they don’t come to think of writing as something self-indulgent and introverted, which is death to anything worthwhile. Even the incredibly private Emily Dickinson was always sending drafts of poems to her friends and family.

Have you ever suffered from writer’s block? If so, what helped?

Hmm – the term ‘writer’s block’ covers so many wildly different things. A genuine block, where confidence, or the sense of inner permission, is just completely shot to pieces for some reason, is a real and awful thing for any writer I think, and when it’s happened to me the only cure has been time. I don’t believe any of the usual tips can really help something like that: it’s a kind of wound, and it has to heal. Going back to books that have that magical ability to make you want to write again, to join back in the conversation, is the only practical help I’ve ever found in those kinds of times. Discovering which writers’ voices can unlock your own is like finding a pub in the desert. Borges, Mason, Natalia Ginzburg, Claire Keegan and Paul Bowles have been lifesavers for me at various times; John Clare, Bishop and Frost in poetry – I don’t know why, and I don’t want to think too much about it in case the magic ever stops working. It’s a completely personal thing, and nothing to do with themes and ideas or any of that nonsense.

When I find my writing simply getting crowded out by other pressures in work and life, I do my best to be productive with the aspects of writing that don’t demand the same peace and solitude that raw creation does (for me at least – I wish I was better at compartmentalizing and not letting one worry infect everything else, and I really envy writers who can do that). So I’ll go back to ‘problem’ stories or poems and wrestle with some editing.

The other trouble with thinking in terms of ‘writer’s block’ is that long fallow periods are absolutely fine (probably essential) if your brain is in that phase of creating. I remember Kathleen Jamie saying once to a class of students that in between collections she sometimes felt that the ability to write poems came and went on a kind of orbit like Halley’s Comet, and when it was off in deep space she had to wait for it to come back again. But when it did return, all the silent time went into the making of the new poems – a kind of unconscious preparation. Maybe it’s different for full-on novelists, but for short story writers and poets I think periods of ‘block’ are actually healthy and necessary – the brain’s linguistic and creative battery recharging. I don’t think I’ve spent a single day as an adult without thinking about some problem I need to solve in a story or poem, or mentally adjusting a word or a line, but I’ve spent plenty of days without scribbling. That doesn’t bother me at all. If I don’t have anything to say at a given time, I don’t mind shutting up and waiting.

The brilliant Marilynne Robinson took 24 years to follow up Housekeeping with Gilead. In all his long life, Norman Maclean wrote just a few stories apart from his pitch-perfect novella A River Runs Through It. I don’t think he was ‘blocked’, I think he just didn’t feel the need to produce for the sake of producing. It’s different for every writer of course, and I know that Robinson and Maclean are extreme examples, but the idea that constant production is what being a writer is all about is deeply flawed, and can easily lead to bad, half-baked books.

Do you have any rituals around your writing practice? Do you prefer to write in a particular place or at a particular time of day?

I like to write in the morning and late at night. I can’t always do that because I teach and the obvious spikes in teaching loads and marking throw everything else out of whack. I write first drafts in longhand and I’m at my most productive when I’m sitting facing the back garden with an A4 pad of paper on my lap. I don’t get distracted much (it’s a pretty boring little garden!) but just having the awareness of space in front of me, and plenty of light, always calms my brain down and lets me slip into the right kind of concentration. My bladder (hopefully not my prostate) is my greatest enemy. When I’m editing I work best in front of a computer screen, and it doesn’t matter where I am then. I think I do my sharpest editing really early in the morning – from 5 to 8 kind of time. When I was under pressure to finish Mercy Seat to deadline I spent a couple of months writing in those 3 early morning hours too before thinking about teaching, emails etc.

Have you ever kept a journal?

I jot things down all the time, but it’s always objective stuff – things I’ve seen, overheard or been struck by when reading, or tinkering with a problem line/sentence I’ve been mulling over. Sometimes maybe a dream that’s shaken me up in some way. The idea of a subjective journal full of thoughts and angsts just makes my blood run cold. I use note taking as a purely technical/craft thing – I’ve no interest at all in preserving my day to day feelings, opinions and whims. It would feel a bit like saving dandruff in a bag.

Are you a planner? Do you outline a book in advance, or do you just start writing and see what happens?

I always get the impulse for a short story (or, very rarely, a novel or novella) in a random, intuitive way – I’ve never begun with an abstractly developed ‘idea’ for a narrative, and have no interest in doing so. Having said that, I’m sure I’d think more in that way if I was working in a genre like crime or historical novels, for obvious and perfectly good reasons. I have a story floating around in my head right now which I think might end up being a novella or novel, but all I know about it is that it involves a young guy (16) getting into a relationship with a much more sophisticated older woman and sneaking off to the continent with her (she’s Spanish). I’ve got the ‘feel’ of the characters and their relationship to each other, but that’s about it. If it ends up just being a short story, that’s fine – I’m not going to force it into anything longer by sitting around plotting dramatic things for them to do. I’ll just see how they get on once they start talking and acting up. I think I’ll know more about the length it needs and the kinds of things they get up to when I have time to let them out of my head and onto the page: I need to finish another story first.

Brighten up your Inbox! Sign up to receive my monthly Inspiration Letters here.